To start, and I have probably mentioned in previous posts, Lyla has scoliosis - a right curve with associated kyphosis (curve protruding from her back)
...

Back in September 2012, Lyla had an orthopaedic appointment for a spinal check-up and x-ray; at that stage Lyla's spine had curved to about 70º+ in the space of 10 months, so it was quite a severe and progressive curvature.  At that September appointment the specialist told me (as we discussed this at a previous appointment) a spinal brace would not help Lyla - 1. because it is very constrictive and will not help her already bad breathing issues, and 2. her spine will more than likely return to this position over time.  He breifly mentioned surgery, but said she was too young so all they can do for the time being was to monitor it and return in a year.

So fast forward to last Friday when we had the follow up orthopaedic appointment.  We had a 9am appointment at the Women's and Children's Hospital - 9am is not usually a time we are up and in the city by, but the good thing about the early appointment was a semi empty clinic, therefore we did not have to wait the normal 2 - 2.5 hours to see the specialist... Anyways, straight away Lyla went to have an x-ray, this is a somewhat traumatic experience for Lyla, she is not normally awake at 9am, but here she was naked, on a cold table being pinned down and stretched by a stranger.  I try to make all these things as happy or as enjoyable as possible by doing all her favourite things, like explaining everything we are doing; 'one arm out, two arms out, boof out' as I take her shirt off, and 'arms up, up, up' as the radiologist tries to force her arms up in an un-natural position for her; none of this actually helps, but I guess it makes me feel better knowing I am doing what I can to try and make her feel better.

I got the x-ray image straight away and headed back down to the clinic, I thought I would take a quick peek at the x-ray as I waited for the lift, my heart sank as I started to pull it out and I saw all her little ribs squished and the curve of her spine.  I knew her back had worsened, but I don't think I was expecting it to look quite as bad as it did.  We waited about 30 minutes to see her specialist, he came in and measured the curve on her x-ray and he said it has reached and slight passed the 100º mark - 100 degrees!? 100 degrees!?  I remember the last time I saw him he said, "Once a curve reaches 90º people start to have lung and heart issues", Lyla is now at 100º what does this mean?  I asked if he has seen this degree of scoliosis on someone before, he said he has, its very rare but he has seen it with older people, and that it is very, very rare for someone Lyla's age to have this severity.

He checked Lyla out and did all the usual things, he said she still has some flexibility in her spine which is good, he also said her spine is rotating and we're now stuck in between a rock and a hard place and she needs something done as soon as possible, and surgery is the only option... Surgery was something we didn't want to do, especially when Lyla was younger, because her future was so unknown we didn't want to put her through surgeries just for the sake of it, but if that's the only option we have, we have no choice... The specialist said the plan is to return in 1 month for some more x-rays and then he wants her to have an MRI (under anaesthetic).  Lyla is having an anaesthetic in January for botox in her arms, so I asked if he could contact her rehabilitation doctor to combine them, which he did, but he wants it done sooner, so he'll try push the botox forward.  And after all of that, surgery.  He said because Lyla is so small and still growing, surgery will need to be performed every 6 months to replace the rods.  Apparently there are some other, newer options, but he is unsure if they're available in Australia, or if they're available in her size. 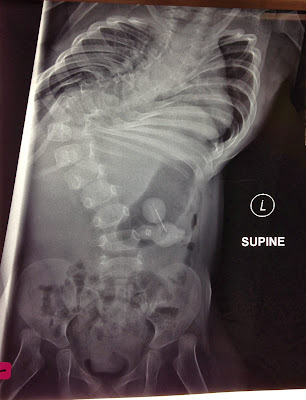 this is her x-ray from last week 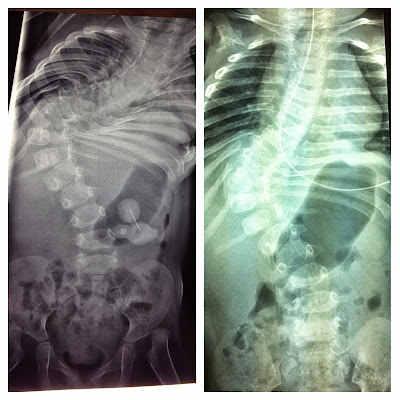 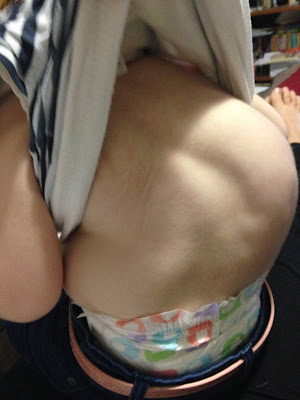 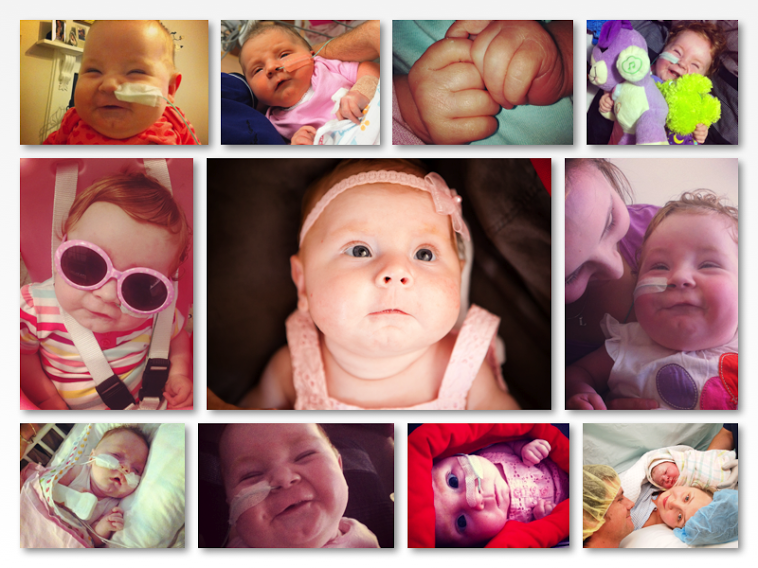